Treasured Belongings: The Hahn Family & the Search for a Stolen Legacy 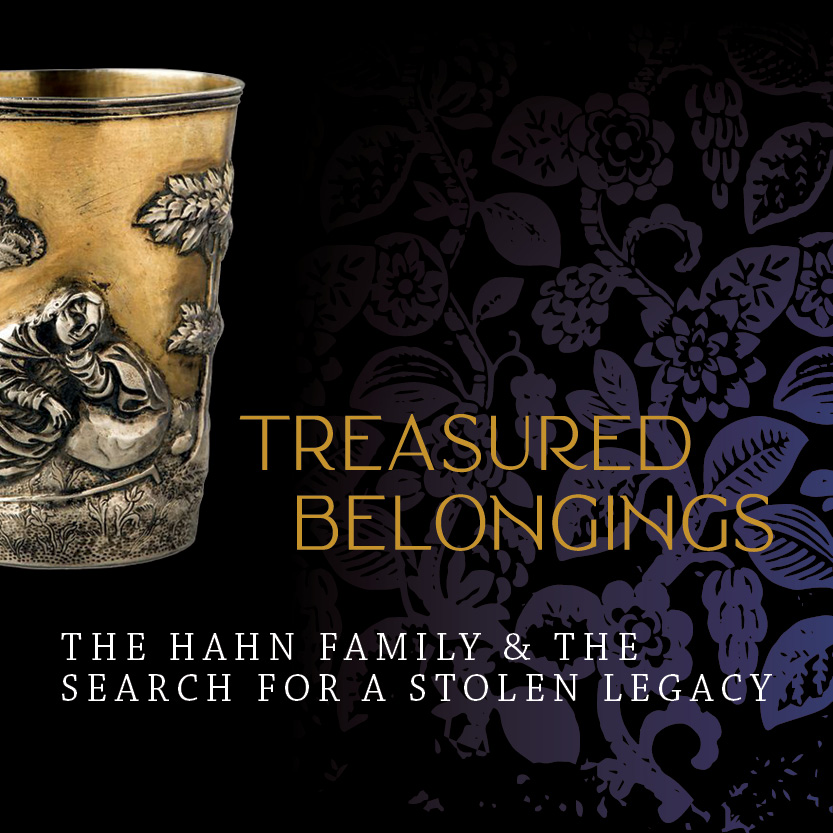 Born in Göttingen, Germany in 1880, Max Hahn was a successful businessman, civic leader and passionate collector. The Hahn family’s Judaica collection was one of the most prominent private collections of its time, rivalling those of the Rothschild and Sassoon families.

After Max was arrested during the Kristallnacht pogrom of November 1938, the Nazis proceeded to confiscate his silver Judaica and strip the family of their property and possessions. With the support of his wife, Gertrud, Max engaged in a lengthy battle to save his Judaica. While their children, Rudolf (later Roger Hayden) and Hanni, were sent to England for safety in 1939, Max and Gertrud were deported to Riga in December 1941, where they ultimately perished. Most of the collection was never recovered.

Roger’s son, Dr. Michael Hayden, MC, OBC, became immersed in his remarkable family history when he encountered photographs and documents left to him by his father. This original exhibition developed by the Vancouver Holocaust Education Centre brings together items from the Hahn archive alongside rich artefacts and interviews to detail the story of the Hahn family, their collection, and their descendants’ restitution efforts. Involving extensive research and intensive negotiations with German museums and archives, the family’s ongoing search for their stolen collection speaks to timely themes of cultural loss, reconciliation and intergenerational legacy.

I have just seen a marvelous exhibition of a wonderful story, professionally curated, meticulously researched, intellectually informative and deeply moving. Thank you for the important work you do!

Join us for a 30-minute video-recorded tour with curator Dr. Ilona Shulman Spaar through Treasured Belongings: The Hahn Family & the Search for a Stolen Legacy. Learn about the German-Jewish Hahn family as they navigate escalating Nazi persecution leading to their separation and displacement, the theft of their property and businesses, the confiscation of their silver Judaica collection, and the murder of family members Max and Gertrud Hahn.

Made possible through the generous support of the Diamond Foundation.

Dr. Michael Hayden, A Treasured History: A Story of Loss, Courage and Renewal
Dr. Hayden tells the story of the Hahn family and their collection before, during and after the Holocaust in his keynote presentation at the Kristallnacht commemorative program, presented by the Vancouver Holocaust Education Centre in partnership with Congregation Beth Israel on November 7, 2019. David  Cooperstone, videographer.

The Globe and Mail – Family treasures looted during Germany’s Kristallnacht on display for the first time at Vancouver exhibition
By Marsha Lederman, November 8, 2019
http://tiny.cc/GlobeandMail

Association for Research into Crimes Against Art – Exhibition Commemorating the 81st Anniversary of Kristallnacht
By Yvonne Illich, November 7, 2019
http://tiny.cc/CrimesAgainstArt

The VHEC: A Teaching Museum
Plan a Visit
EXHIBITIONS